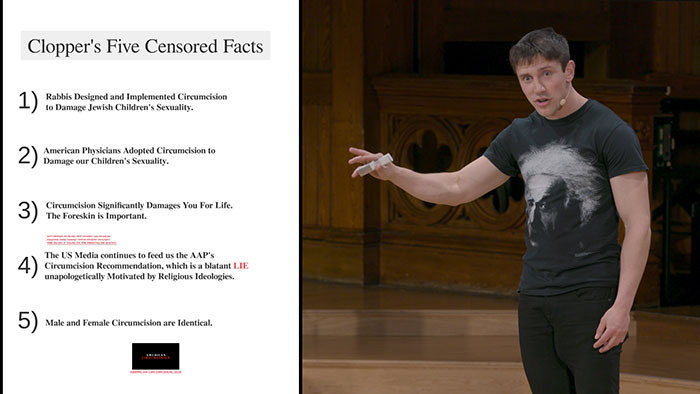 Thank you to YouTuber Mr. Obvious for his concise video, summarizing my major points. Video above.

In my 2-hour, one-man play at Harvard University that premiered on May 1, 2018 titled "Sex & Circumcision: An American Love Story", I took the audience down to the bottom of the rabbit hole, exposing the dark religious ideologies at play in the United States and abroad.

For those of you who don't have the full two hours to follow me through this disturbing, yet enlightening journey, the major facts of the presentation are listed below. I have dubbed them "Clopper's 5 Censored Facts":

Censored Fact 1: Rabbis codified Circumcision in the Old Testament to Damage Their Children's Sexuality for Life and Permanently Brand them as a Member of their Baby-Cutting Religion

Censored Fact 3: Circumcision Damages You for Life. The Foreskin is Important

Censored Fact 4: The Complicit and Compromised Media Force Feeds the US Public The American Academy of Pediatrics' (AAP) Circumcision Recommendation, which is a Blatant Lie Unapologetically Motivated by Greed, Avoidance of Legal Liability, and the Baby-Mutilating Demands of the Jewish Covenant of Circumcision

Social groups can be defined by their most extreme behavior: Judaism is no different.

Judaism is a religion that largely centers around cutting off sex organs from children. Beyond being heinous behavior; by any elementary legal analysis, it should be illegal. Many European countries are trying to make it illegal and international Jewish organizations, like the ADL, are crying "anti-Semitism" as they commit the actual anti-Semitic act of damaging their Jewish babies to satiate their ancient genital blood sacrifice, arguing this demented "tradition" is protected behavior.

A nation of free men do not bear slave scars on their genitals.

The time has come for us to protect all our children, including our Jewish and Muslim children, from circumcision, from religiously-inspired sexual violence cloaked as medicine.

Why-soever would Harvard's leadership terminate my management-level position at their university for voicing the above views in light of my resounding performance reviews, the standing ovation I received in their premiere theater, and their "commitment to free speech"? That is a good question to ask.

To support me in my lawsuit against Harvard, please consider donating here: https://www.clopper.com/donate